Readalong One: 'Manazuru' by Hiromi Kawakami 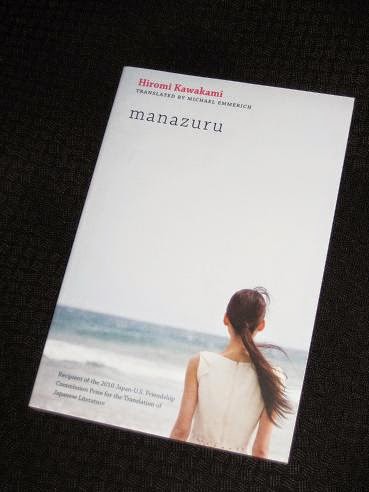 Two years ago, during the first edition of January in Japan, my group read choice was Hiromi Kawakami's understated novel The Briefcase, a book relating a May-to-December relationship between a thirty-something woman and a former high-school teacher (the book later came out in a British edition under the title Strange Weather in Tokyo).  It was a fairly successful choice, so I was happy to go back to Kawakami for Manazuru, the first of this year's group reads.  I wonder if this one was as successful...

*****
As far as I'm aware, the two books mentioned above are the only ones to appear in English so far - which is not to say that there's nothing else out there.  You'd be surprised what you can find if you look hard enough...

During my travels through the net, I managed to stumble across a few short stories available for free:

'Record of a Night Too Brief', translated by Lucy North (Words Without Borders)

'In the Palace of the Dragon King', translated by Michael Emmerich (World Literature Today)

In addition, I found an interview where Kawakami talks about a text ('Blue Moon') which appears in the Granta 127: Japan edition (the piece, sadly, does not appear online).

That should keep you busy for a while ;)

*****
So, onto the main event :)  What did you all think of Manazuru?  Here are a few questions you might like to ponder:


1) How much can we trust Kei as a narrator?  In what way is she perhaps less than reliable?
2) Would you agree that there are a lot of pent-up emotions felt by all the main characters in the book?
3) How effective do you feel the 'otherwordly' sections are?
4) What did you think of the character of the female 'spirit'?
5) For those who had read The Briefcase first: how did you feel about the difference between the two books?

Feel free to leave comments below, or on any of the reviews of the book - and speaking of reviews...  Please use the linky below to post links to your review of the book!  As we know what the book is, just put your blog name in the first space and the link in the second.

I can't wait to see what you all thought...