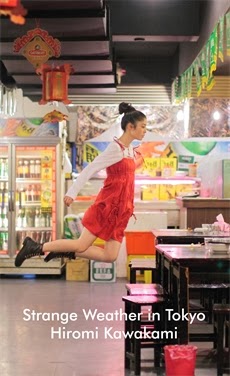 Today's post is a break from the usual schedule as we play host to a guest review.  Jacqui (aka @JacquiWine on Twitter) has been a great supporter of January in Japan, and even though she doesn't have a blog, she wanted to share her thoughts on one of her reads - so I generously offered to hand the blog over to her for a day.  Jacqui's choice was Hiromi Kawakami's Strange Weather in Tokyo (previously released in the US under the alternative title of The Briefcase).  Over to you, Jacqui :)

Sensei, I whispered. Sensei, I can’t find my way home.

But Sensei wasn’t here. I wondered where he was, on a night like this. It made me realise that I had never telephoned Sensei. We always met by chance, then we’d happen to go for a walk together. Or I would show up at his house, and we’d end up drinking together. Sometimes a month would go by without seeing or speaking to each other. In the past, if I didn’t hear from a boyfriend or if we didn’t have a date for a month, I’d be seized with worry. I’d wonder if, during that time he’s completely vanished from my life, or become a stranger to me.

Sensei and I didn’t see each other very often. It stands to reason since we weren’t a couple. Yet even when we were apart, Sensei never seemed far away. Sensei would always be Sensei. On a night like this, I knew he was out there somewhere.
p.59 (Portobello Books, 2013)

Strange Weather in Tokyo (translated by Allison Markin Powell) is the story of Tsukiko, a woman in her late thirties, who re-encounters one of her old high-school teachers (‘Sensei’, a man thirty years or so her senior) in a sake bar. They meet by chance one evening, and over the course of the following months a connection develops as they seek solace in food, beer and sake.  Their relationship feels quite unstructured; they rarely make arrangements to reconnect, and weeks can pass before their visits to the sake bar coincide. They are both essentially quite solitary individuals, but there’s a sense that they gain some comfort from these encounters.

The story is told through the eyes of Tsukiko, and there is an almost dreamlike, slightly surreal quality to the narrative as it unfolds over the course of the novel. We follow the couple as their relationship evolves and deepens; it starts with shared moments in the sake bar, and develops to include trips to a local market, a mountain hike to collect mushrooms and a cherry blossom party. There are some wonderfully-observed details in these passages; nature features as a theme, and we see the changing of the seasons as the months pass. Another passage features a description of Sensei’s house with its collection of railway teapots, and this adds to the slightly off-beat tone of the novel.  In a poignant scene, Tsukiko attempts to peel an apple whole, in one long curly piece (she had impressed a former boyfriend some years ago by managing to keep an apple skin intact). This time, however, the apple skin breaks part way round, and Tsukiko bursts into tears as the broken peel comes to signify her loss. Tsukiko had been very much in love with this former boyfriend, but she seemed unable to express her feelings, or demonstrate she cared for him. 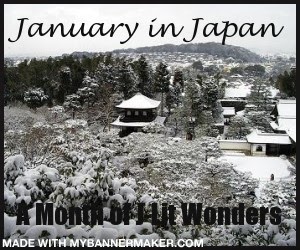 I loved the delicate, nuanced quality of the relationship between Tsukiko and Sensei. There are times when they seem to communicate predominantly through feelings, using few words, soundlessly conveying deeper emotions and an intimacy through thoughts and gestures. The unstated, yet deep, nature of their relationship contrasts somewhat with Tsukiko’s brief flirtation with an old classmate from school (Kojima) whom she bumps into at the cherry blossom event. There’s a sense that Tsukiko is only really content and able to ‘settle’ in some way when she is with Sensei:

Everything felt so far away. Sensei, Kojima, the moon – they were all so distant from me. I stared out of the window, watching the streetscape as it rushed by. The taxi hurtled through the night-time city. Sensei! I forced out a cry. My voice was immediately drowned out by the sound of the car’s engine. I could see many cherry trees in bloom as we sped through the streets. The trees, some young and some many years old, were heavy with blossom in the night air. Sensei, I called out again, but of course no one could hear me. The taxi carried me along, speeding through the city night. (p.92)

I found this to be a beautifully-written and moving novel, expertly and sensitively translated by Allison Markin Powell. I think it will stay with me for some time; the ending in particular brings real emotional weight to the story of Tsukiko and Sensei’s relationship. I read this last year and revisited it this month for Tony Malone’s focus on Japanese literature (January in Japan) and can recommend it to anyone interested in a quietly powerful book about loneliness, connections and the uncertain nature of relationships.

*****
Thanks, Jacqui :)  This was our readalong choice last year, and as I recall, most people enjoyed its understated nature.  But what do you think?  Was this one for you, or was it a little slow for your tastes?  And what's your take on the change of title (and cover...)?  As always, let us know in the comments - we'd love to hear your thoughts :)
Posted by Unknown at 06:00